The steady drip feed of information about the post-BPS world continues. Here are some of the latest developments.

New guidance, stemming in part from the pilot, has been issued on how the general scheme to be released later this year will work. This guidance contains few surprises, but there are some points to note:

Higher levels of these standards will be made available in due course. Further standards are also forthcoming: DEFRA has released the following timetable for these: 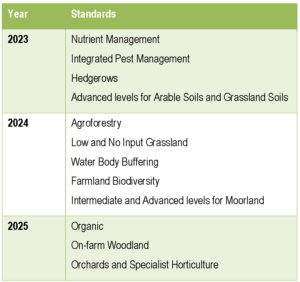 We still await the fine detail of the application process and what the annual declaration (the closest thing to an annual claim) will look like in practice.

The first round for this “Tier 3” of ELMS is now open. It is limited to areas of 500-5,000ha, and offers funding for “restoring England’s streams and rivers” and “recovering and restoring England’s threatened native species”.  The application process is very different to previous schemes, requiring a detailed, bespoke project document to be evaluated by an independent assessment panel. It is a process that will be more familiar to the charitable sector than resembling previous agricultural subsidies. This perhaps indicates the scheme’s intended audience.

The guidance also states that projects should only include farming in a highly limited capacity, such as conservation grazing, if it is involved at all. This is in marked contrast to DEFRA’s previous rhetoric such as in the November 2020 policy document “The Path to Sustainable Farming: An Agricultural Transition Plan 2021 to 2024” which said Landscape Recovery “will be for farmers who want to go even further” with an emphasis on collaboration between farmers. Precisely, alas, as we predicted in our article last year “The Future of Farm Policy (29/09/2021)”: “ …Landscape Recovery, which will involve very large “rewilding”-type projects. This is likely to mainly interest wildlife charities and large corporations looking to improve their “green” credentials.”

In other words, when governmental promises were made to maintain the agricultural subsidy budget at 100% of its level prior to leaving the EU, we were yet to be told that 30% of this budget would be explicitly for funding the long-term removal of land from agricultural production!

The Welsh Government have also released some information about their own future, although details are sparse. Confirmation is only of a total level of funding, £227m over the next three years, £100m of which will go to six headings of:

While there is a definite environmental focus, there also seems to be a significant weight given in Wales to supporting the production of food, albeit in a sustainable way, which is altogether absent from the English system. This is interesting because previously, due to the relative value of their BPS payments, English farmers (along with their counterparts in Northern Ireland) have historically been the winners of the “postcode lottery” of farming subsidy. Perhaps that situation is set to change.