Townsend Chartered Surveyors as the UK’s market leader in trading BPS entitlements (and previously milk, beef and sheep quota, and other EU subsidies) is always primed to make the most of new developments and opportunities for their clients. In this case the creation of new woodland or restoration of peatlands and farmland sequestration and the subsequent selling of the ‘captured carbon’ in the open market.

In recent years, Government policy has seen an increasing focus on environmental measures, culminating in the Environment Bill moving through Parliament at the time of writing. Part and parcel with this is a sustained legislative drive to reduce the nation’s net carbon emissions, which has led to such measures as a ban on new internal combustion vehicles by 2030 and a legal requirement for tenanted property to meet a minimum set of energy efficiency standards.

Reducing net emissions does not, however, just mean emitting less carbon. Certain measures can also remove carbon from the atmosphere. Currently we are subject to the EU Emissions Trading System until 2021 which penalises some businesses if they either do not cut emissions or buy allowances from others which have done so. Such businesses can avoid a penalty by offsetting their carbon emissions with the purchase of ‘units’ of captured carbon, but under current rules these can only come from abroad. Many other businesses are legally obliged, or strongly encouraged, to publish their carbon emission figures, which allows them to be scrutinised by an ever more ecologically conscious base of consumers.

In addition, the Committee for Climate Change of 2019, building upon the Climate Change Act 2008, has given a target of net zero carbon emissions by 2050. This will require a wide range of measures affecting all areas of the economy, and carbon capture is a powerful tool available to help meet this goal.

The Government has already put into place a system in which carbon removed from the atmosphere by woodland planting or peatland restoration can be ‘bought’ by businesses wanting to self-regulate their offsetting, to prepare for future legislative offsetting requirements, or to be seen as ‘green’ as possible in their marketing. 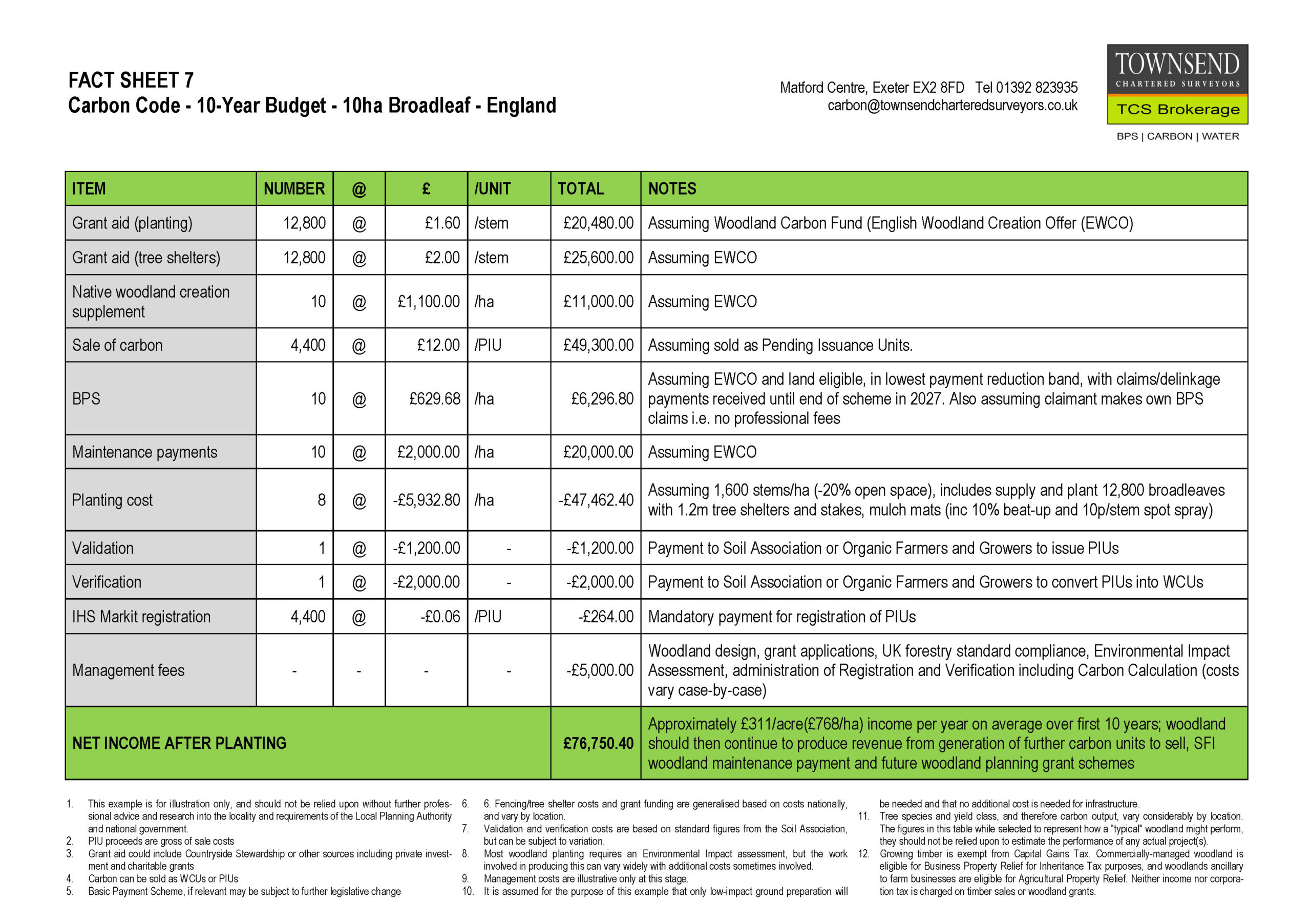 Future of the Carbon Offsetting Market

Mark Carney, climate change advisor to Boris Johnson, has established a task force to promote the expansion of the carbon offsetting market. There are two key objectives; firstly, to look at how best to expand the market and secondly to ‘legitimise’ the market by establishing a framework to regulate and standardise the price and quality of carbon units across projects.

This is a key development for the UK carbon market. The Government has so far been slow to embrace offsetting as a tool to reach carbon neutrality, understandably focusing on reducing emissions in the first instance. For certain industries, however, there will always be a level of emissions produced out of necessity. Once a company has made all possible reductions then offsetting is a great option for companies to reach net zero carbon footprint.

Issues have been raised however, concerning these carbon projects. International projects have in the past been found to achieve less carbon sequestration than expected. Cases like illegal mining causing deforestation in Madagascan forests used for carbon capture has undermined the reputation of international offsetting projects. There is a perceived lack of transparency and quality assurance; when the project is halfway across the world, how does one know it is delivering what was promised to a purchaser of captured carbon? UK projects such as the Woodland Carbon Code have a rigorous, ongoing validation and verification process by independent bodies. These provide a high-quality carbon unit for the purchaser and this excellence should be promoted.

This task force aims to unify the various UK carbon capture schemes and promote them to a wider market with a focus on project quality and confidence. This would provide a huge boost to a market primed for expansion. As companies large and small, increasingly pledge carbon neutrality, farmers and landowners should consider a range of carbon capture schemes from woodland creation to peatland and soil management to meet this demand and alleviate the upcoming loss of BPS direct payments.

The WCC is the Government approved voluntary standard for UK woodland creation projects where the landowner wants to verify and trade the carbon captured by the new woodland, and is administered by the Forestry Commission.

Carbon is sequestered or ‘captured’ by woodland, and measured in the form of the Woodland Carbon Unit (WCU). This term is used to represent the amount of carbon dioxide removed by a certain amount of trees per year. The Unit represents a tonne of carbon dioxide captured in verified woodland which can then be purchased by companies to offset emissions or to claim carbon neutrality for the business. The Forestry Commission report that landowners with new woodlands which meet the standards set out in the WCC initially sold carbon upfront to companies for between £5 and £15 / tCO2 however this was before the latest Woodland Carbon Guarantee auctions resulted in average of £19.71 WCU/tCO2. A new native woodland can capture 300-400 tonnes of CO2 equivalent per ha by 2050. This would on average represent £93 per acre per annum with up to £106 per acre per annum potentially available, this will rise if competing demand from the corporate sector is sufficiently strong.

A business wanting to offset its future emissions may also purchase a Pending Issue Unit (PIU) which is in effect the future deliverance of a predicted WCU over a period of time. Whilst this cannot be used to offset UK-based emissions until a WCU is verified, it does allow a business to plan for offsetting future emissions. The WCC provides the standard for verification of WCUs, and this allows a purchaser assurance that any units purchased are actually providing the carbon capture they are paying for. The WCC requires woodland to be re-checked every 10 years.

In addition, the Government’s Woodland Carbon Guarantee (WCG) aims to support and encourage the planting of new woodland for carbon capture. This scheme guarantees that a landowner will be able to sell their WCUs to the Government for a pre-agreed price every 5 or 10 years up to 2055/56. You would still have the option to sell via the open market should prices rise above the pre-agreed price, but would retain the security of a guaranteed minimum price from the Government. Being accredited under the WCC is a requirement to be eligible for the Government’s WCG. The value of the WCU is determined via reverse auction before a contract with the Government is agreed. The results of the first auction in February gave an average value of £24.11 per WCU/tCO2. The second auction, in June, saw values of £19.71 per WCU. The upcoming auction in October, has allocated 75%of the £1,000,000 funding budget exclusively for new plantings of predominantly native species. This means landowners undertaking plantings of this type will no longer be in direct competition with the non-native coniferous woodlands potentially pushing up unit prices.

In these times of ‘public money for public goods’ and the upcoming loss of Direct Payments, landowners need to make some tough decisions on whether their current mode of business is still viable without BPS payments. Woodland schemes could help provide this alternative carbon income from poorer land as well as the future income from timber products including seasoned firewood, wood fuel, the thinnings and final crop of timber.

It may also be possible to use an agroforestry system to generate WCUs without taking land out of agricultural production. In this instance you would combine grazing with low density woodland to gain three sources of income including currently the BPS payment.

Peatland restored under the Peatland Code works in a similar way. Projects have a set of standards and procedures which allow carbon buyers assurance that their carbon units have a verified status, providing confidence in the market. Whilst still at an early stage (the first Peatland Code validation was awarded in 2018), the market value, supply and demand is expected to surge as the Government legislates for carbon neutrality across the country.

We have available for sale carbon units from individual farms who are carrying out intensive management of their soils with special crop rotations. These types of unit are not currently part of a verified scheme but can still be used for voluntary offsets. In the future this type of farm management aims to replace the Basic Payment as part of the Governments Environmental Land Management Schemes.

What we can do for you